Do mobiles only save lives?

It is often argued that mobiles save lives because you can make phone calls in emergency situations. This is true if you look at it from only this point of view. But what about the number of deaths caused by people using their mobiles in road traffic? More people are actually killed in such accidents than saved by their mobiles.  The English police confirm this sad truth in their film about mobile phones in road traffic.

Hypersensitive in Britain – the shocking truth

Brian Stein, executive of a huge British food company, talks about his electrohypersensitivity and reveals the shocking truth about the scandals connected with radio technology.

The Vienna Physicians Association’s Rules for Cell Phone Use

Publiziert 15. April 2009 | Von Anne
When I was ten, I had my first experience with radio communication. I had saved money to buy two walkie talkies and I became so fascinated by the possibility to communicate without a cord that I immediately started to save more money for a device with a longer range. When I was twelve years old, I started operating my first radio room with a range of about 20 miles. But soon that was not enough for me either. I was told that it is possible to take a test for non-professional radiocommunication service, and once one passes the test, one is allowed to radio all over the world. However, I had to wait until I was 14, which is the minimum age for taking this test. In the meantime, I gained further experience with radio technology and electronics. When I was old enough, I passed the test on the first attempt. 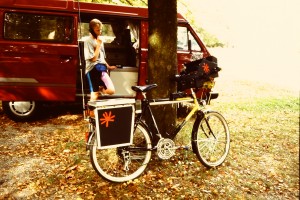 Summer 1992: Uli Weiner using a Siemens P1 and the new D1 net of the German Telekom. In front of the tree his radio bicycle.

Since then I have had a radio amateur license and could communicate all over the world, theoretically. However, I could not afford the necessary equipment and thus had to start saving again. To speed up this process I worked in different jobs. I got the opportunity to install in-car telephones after school, which I enjoyed a lot, especially because I could work with the latest models of mobile phones. That is how it became absolutely clear that this was what I really wanted to do and I started an apprenticeship in communication electronic technology, specialization radio communication.

In my last year as an apprentice, when I was 18 years old, I applied for a trade license and founded my own company. First, I sold mobile phones and the first cell phones, later I added ISDN telephone systems. Demand was high and so my business grew very quickly. When I was 20, I had about 20 employees. I worked primarily with customers in the field service and thus used in-car telephones and cell phones frequently. My car was nicknamed “Hedgehog” because it always had between 7 and 15 antennas on the roof, depending on what I was testing. The name was absolutely justified since I had built in everything that was technically possible at that time. There was a fax as well as a mobile internet access. Compared to what is possible today, it was in fact extremely slow and in those days not that important as all communication was operated by fax and telephone.

Throughout this, I never considered health effects, believing that if it was dangerous, it would not be allowed. Only when the digital D-net was implemented, some doctors and technicians warned me that there was no proof that the digital radio technology is innocuous. I heard these warnings frequently, but did not care and continued using my cell phone excessively. This went on very well for several years, until one day I could not concentrate any more after using the mobile. First I was always in denial and started my own tests. I abstained completely from using my mobile for several days to find out if that had anything to do with my concentration. And in fact, on those days without my mobile I could concentrate better and got a lot more work done than on days when I used my mobile. I tried this repeatedly for several months until I had to admit that there was a clear connection. I decided to re-structure the whole company so that we could work without mobiles. This worked very well and we not only managed to work without using the mobile, but we also increased our performance and sales volume.

Unfortunately mobiles were rapidly popularizing and more and more cell phone towers were being built. I soon had to experience what it means to phone passively. Each time someone used his mobile near me, I had exactly the same symptoms as if I used the mobile myself. Consequently I
had to learn how to avoid this. At first this was fairly easy because in most buildings you had no reception and people had to go outside to make a phone call. But with the increasing network expansion it became more and more difficult and I started to have problems when I was near transmitters.

In 2002, this culminated in a severe physical breakdown in the Frankfurt Airport. I was just retrieving my baggage at the baggage claim when suddenly I got a massive sight disorder, followed by lalopathy and cardiac arrhythmia. I was taken to hospital and there everything was well documented. My breakdown had been caused by the heavy microwave radiation produced by the many transmitters at the airport.

I soon realized that I couldn’t continue my life in the same way as before. When I was released from hospital, I tried to recover at home, but to no avail. As soon as I was strong enough, I took my car and drove into the woods. I stayed there overnight trying to catch some sleep in the back seat. And it seemed like a miracle that on the third day I felt strong enough to return to my office and resume work. At night I took all available measurement equipment from the company with me into the woods. Indeed: there was no cell phone reception, no TV and only a very weak radio signal. As I first did not want to believe that some radio system could have such an effect on my body, I repeated these kinds of tests several times. And it became more and more clear to me that the digital pulsed radio does not agree with biological systems. I started to do some research and found lots of studies over the years that proved all this. Additionally I got to know lots of people similarly concerned with the effect that radio waves have on the human body. Originally, these were mainly technicians, engineers and operating personnel of transmitters. But in the course of the years, more and more people from non-technical backgrounds were involved. They all had something in common: They either lived near a cell phone tower, or they had a transmitter in their own house without knowing it, e.g. a wireless telephone and / or WiFi. To spread my knowledge, I started giving public lectures and warning the unsuspecting people of the dangers of cell phone and radio systems. 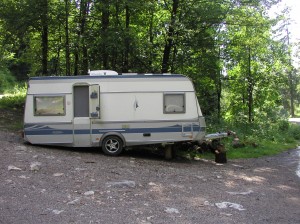 For my health, I decided to buy a caravan and to live in it in one of Germany’s few quiet zones. That is how I recovered so that I could at least temporarily return to irradiated areas. Additionally, I always wear my radiation protection suit when I leave the quiet zone. Because of the fast network expansion and the advanced stage of my disease I was no longer able to keep up my business. I had to dismiss all my employees and give up all business activity. My friends and supporters give me everything I need to live successfully in the woods.

In spite of all these circumstances, it is important to me to do all the work I do now honourably. Most important to me are children and teenagers, who use this technology to a large extent and therefore often fall ill not understanding that their illness comes from their beloved mobile. This is why I use most of my remaining strength to promote education in schools. Secondly, I work to preservequiet zones because I believe it is extremely important to allow people affected by the radio waves to live a dignified life, free of radio and mobile waves. Most of them would be able to hold their jobs if only they could move to a quiet zone. The burden that lies on families with a member affected by these waves would be eased, too. In order to accomplish this task and to have other people for support, I founded together with others the Alliance for Stop 5G, www.stop-5g.de. More and more people concerned come together there, as well as people who do not want to be harmed by this technology. Further details about my life and my work can be found on this internet site.

Powered by WordPress and WordPress Theme created with Artisteer by Alfred Stehbeck.